Iliyan Denev Nikolov was born on July 20, 1946 in Veliko Tarnovo. He graduates the Mechanical-Electrical Institute and the Institute of Economics in Sofia. At the age of 23 he becomes Economic Director of "Denyu Georgiev" sewing factory. He works as a lecturer and researcher in "St. Cyril and St. Methodius" University of Veliko Tarnovo for 10 years. He is founder of "Mathematics and Informatics" Faculty at the University. In his labour biography, he occupies the position Finance Director of the factory for memory devices. He is also a director SD "Academy" at Bulgarian Academy of Sciences. Author and co-author of over 100 works and publications, including the book "The treasures of the Balkan". In 1990 Ilian Nikolov initiates and realizes the idea Seventh Grand National Assembly to be convened in Veliko Tarnovo. Since 1994 he is an Executive Director of the Association "Ecological Stara Planina". In 1995 he becomes founder of Bulgarian Association for Rural and Ecotourism - BARET. He is also founder of "Vazrazhdane" National movement. In 1996 he is candidate for President of the Republic of Bulgaria.

He is author and host of 200 editions of the weekly television show "Treasures of Bulgaria", where the demographic, social, economic and political problems of Bulgaria are analуzed.

Iliyan Nikolov dedicated 16 years of his life to the preservation and dissemination of folklore musical arts. He will remain in the history as the founder of Festival № 1 in Europe for traditional folklore arts – Stara Planina "Balkan folk", where from 7 000 to 15 000 singers, dancers and musicians take part each year! Iliyan Nikolov defined the Feast as "Miracle born of the strong spirit of Bulgarian people". His great human heart, his immeasurable love for Bulgarian kind and homeland, his sincere attitude towards Bulgarian and World folklore heritage, gave him he strength to organize and conduct dozens of national, Balkan, European and world festivals and championships in Bulgaria and abroad. Through the years, in Musical feats "Euro folk" have participated more than 4 000 artistic groups with more than 80 000 participants from 19 countries. Iliyan NIkolov is main producer of the impressive by its volume and quality television production of films, shows, videos, concert recordings. Part of them are broadcasted by all national televisions, as by television channels in Russia, Sweden, Germany, Belarus, Ukraine, Japan, etc. One of his last great achievements in response to the modern information technologies is the World Internet television "Euro folk".

In 2007, by the initiative of Iliyan Nikolov was established the European Association of Folklore Festivals - EAFF. Iliyan Nikolov is elected for President of the Association. In 2016, 260 festivals are members of EAFF and it turns to be the biggest association in Europe for folklore festivals. EAFF is an applicant for membership in UNESCO and member of IOV-UNESCO, CID-UNESCO.

Tribute to one great Bulgarian! Tribute to his memory!

The organizational committee of Musical feast "Euro folk" announces, that it continues its activities and all festival and championships will be held henceforth. XVI-th Stara Planina fest "Balkan folk 2012" will be held in memory of Iliyan Nikolov. In the award system of Musical feats "Euro folk" will be set a special diploma on the name of Iliyan Nikolov. The award shall be granted to a collective, where continuity between generations has been achieved. The cause for preservation of folklore will continue, because

"Behind us is the memory of our fathers, in front of us are the eyes of our children!" 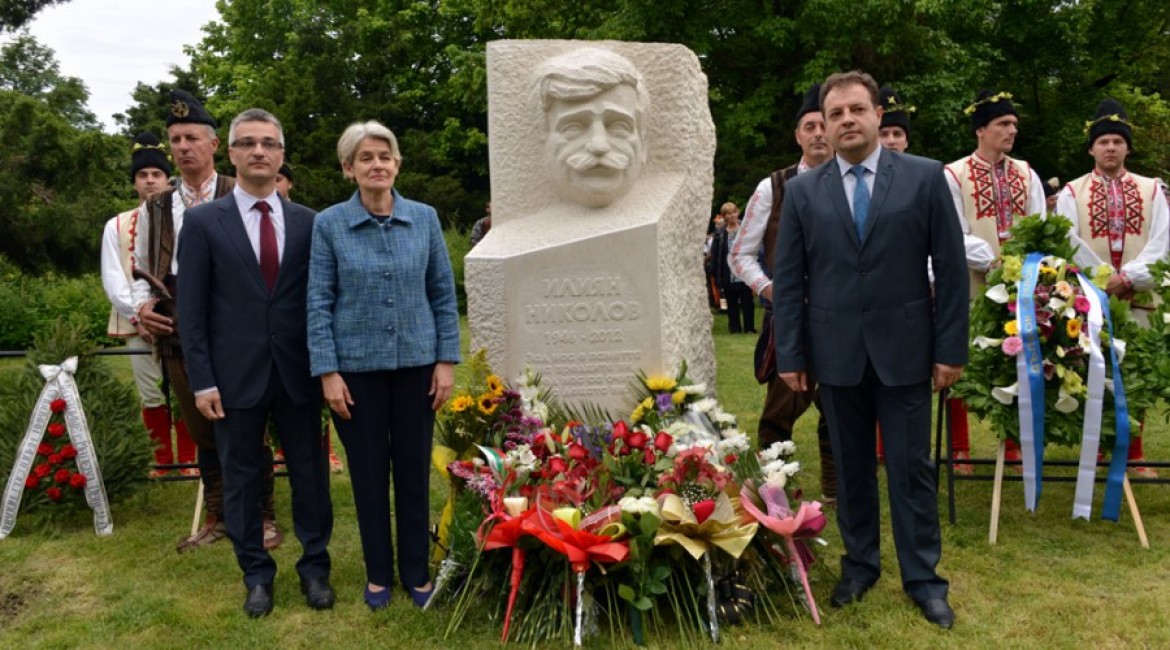 Irina Bokova: "The plaque of Iliyan Nikolov will remind to all citizens of Veliko Tarnovo about all good good deeds, that he did"

On 21 may 2016 The General Director of UNESCO Irina Bokova, the president of the European Association of Folklore Festivals - EAFF Kaloyan Nikolov, the Mayor of Veliko Tarnovo Daniel Panov inaugurated a monument of the founder of EAFF and Stara Planina Fest "Balkan Folk" Ilian Nikolov. The solemn ceremony took place in the old Bulgarian capital Veliko Tarnovo.

In her opening speech, Ms Bokova emphasized the importance of culture and the preservation of intangible cultural heritage as one of the most important conditions for preserving the identity of a nation and wished all participants to keep their love for folklore, traditions and art.

"The commemorative plaque of Iliyan Nikolov will remind the residents of Veliko Tarnovo of all his good deeds, his successes and achievments, which are accomplishments of Bulgaria, Europe and the world. The achievements and the good deeds created by this great Bulgarian are cause for pride not only of his fellow citizens, but also for all our countrymen. I believe that the revealing of plaque in memory of Iliyan Nikolov is a great way to demonstrate respect and recognition for his work as a public figure, dedicated to Bulgarian folklore, made great efforts for its promotion", said Ms. Bokova.

She reminded, that the feast has established itself as a movement for preservation and promotion of Bulgarian traditional culture, known as intangible cultural heritage and that is why, in 2003, UNESCO accepted the Convention for the preservation of intangible Cultural Heritage, in the belief that it is the spiritual wealth that every nation created over the centuries and passed down from generation to generation.

"The songs, traditions, crafts, customs form our cultural appearance and creative being. They are the relationship between our past, present and future and therefore must keep them and pass on to future generations. They are the basis on which was built the upbringing, they also encourage our socio-economic development.", emphasized the Director-General of UNESCO.

As а son, who took confidently in the footsteps of his father for a clean and invaluable inherently cause, Kaloyan Nikolov excitedly and proudly recalled about the 40 festivals in 2007, when he and his father established EAFF. Today members of the Association are more than 270 folk festivals, which makes it the largest in Europe.

Children and grandchildren of Iliyan Nikolov, his relatives, friends, artists and followers laid wreaths and flowers at the monument in appreciation of the work of the great man and the folklore group for spring folklore performed a song, written especially in his honor "Pesen za Iliyan Nikolov".

After the solemn part of inauguration of the monument was held official award ceremony of Mrs. Irina Bokova as bearer of the Honorary Sign of the European Association of Folklore Festivals - EAFF.